While slavery and the oppression of blacks in the South are easily invoked themes tied to the US Civil War, Joseph T. Glatthaar’s Forged in Battle tells the inspiring and often times disturbing story of black soldiers who fought for the Union, providing insight into the plights of escaped Southern slaves and free blacks in the North. Glatthaar presents the story of the United States Colored Troops, the effort by the Federal government to leverage a willing pool of manpower for use in the increasingly costly war to reestablish Federal control over the South. By extensive use of primary sources such as letters, manuscripts, newspaper articles, autobiographical accounts, and government records, as well as an impressive amount of scholarly secondary works, Glatthaar presents a convincing analysis of the relationship between white officers and black soldiers throughout the war.

The social dynamics revealed in Forged in Battle are fascinating, and the motivations of white officers were quite varied and 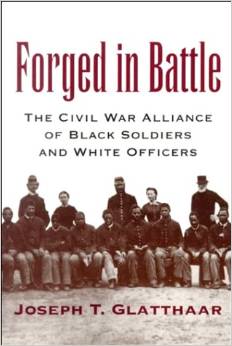 complex. In order to make the use of black soldiers palatable to a deeply racist North, President Lincoln allowed that white officers would almost exclusively command the USCT regiments. While acknowledging the various motivations for these white officers who volunteered to lead black troops, Glatthaar found that many were abolitionists committed specifically to the destruction of slavery and to “uplift the black race.”[1] However, even the most dedicated of abolitionists harbored prejudices and racial biases.[2] The attitudes of Northern whites toward blacks was not one of equality and brotherhood. While condemning the practice of slavery, the average Northerner did not look to have blacks as neighbors and citizens with equal rights.[3] This racial bias carried over to many of the white officers.

In a similar fashion, while the black soldiers who volunteered were united in their intention to destroy slavery, personal motivations of Northern blacks differed from the escaped slaves of the Confederacy. Free blacks in the Union faced intense discrimination, and sought to improve the lives of their race by rallying to the defense of the country, while freed slaves fought for the freedom promised by the Federal government. Interestingly, both white officers and black soldiers often distinguished between free and formerly enslaved blacks.[4]

The exemplary performance of black units in combat certainly began to change the perception in the North of the capabilities of the negroes, but such performance is all the more astonishing since, as Glaatthar observes, “In addition to Rebel soldiers, black commands were battling generations of racial prejudice.”[5] The relationship between the soldiers and officers was complex, and this work admirably enhances the historiography of race relations during the Civil War.