Recently I’ve started doing something that I’ve wanted to do for years: I’ve become a volunteer at the Museum of the United States Air Force, located in Dayton, Ohio.* Once or twice per month, I get to spend several hours within this fine institution, walking among the legacies of the men and women who created modern air power. It’s an incredible experience, and if you haven’t visited, you need to make time to do so. The museum is truly a national treasure, comparable to the Air and Space Museum in Washington D.C.

My time spent within the museum has spurred a number of article ideas and projects that I intend to pursue. But before I get into one of them, I’m going to highlight an exciting upcoming event: on 17 May 2018, the museum will unveil the Memphis Belle to the public, the storied B-17 Flying Fortress that became the first U.S. heavy bomber to complete 25 bombing runs over Europe.  The date selected for this is quite purposeful: it will mark the 75th anniversary of the final mission flown by the crew, on 17 May 1943. After months of careful restoration, the Memphis Belle will be presented amid a celebration from the 17th to the 19th.  Check out the official web page, and the flyer below: 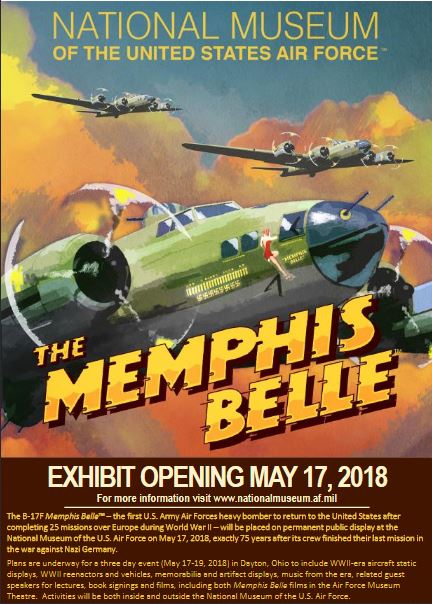 Apart from this, I’ve started to outline a blog series on airborne (and eventually space-borne) intelligence capabilities. The series is directly inspired by my time in the museum. The collections on display are divided into four massive hangars: Early Years/World War I, Southeast Asia/Korea, Cold War, and the newest, Space/Experimental/Presidential aircraft.  With so much history within its walls, there are countless stories and themes one can explore. My interest in military intelligence has led me to start examining the displays that speak to the evolution of air intelligence capabilities. While there are many intelligence-specific exhibits, I hope to present a cohesive narrative of the milestones that have led to the breathtaking capabilities the US Air Force possesses today, starting with the humble balloon.

*This is a good time to emphasize that, although I am fortunate to volunteer at the Museum of the USAF, I do not represent them. Everything posted to this blog is my opinion and analysis, and in no way represents the Museum.